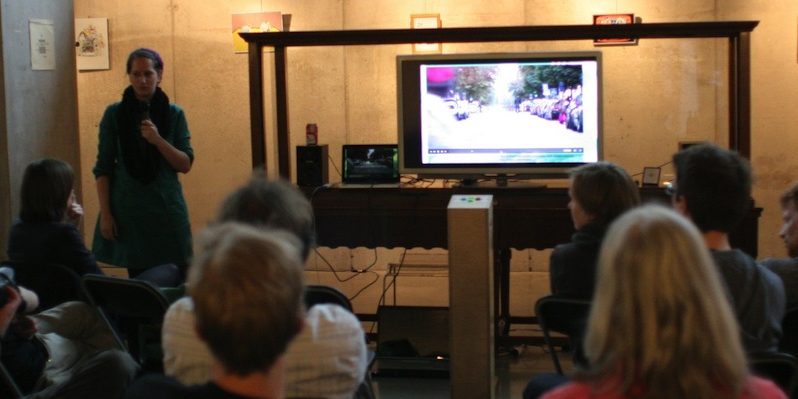 Designcenter De Winkelhaak in Antwerp launched a permanent collection of indie games in May. To celebrate, the center organized a two month ‘game craze’ with an exhibition, game talks, local multiplayer picnic, game workshop and a game party.

On June 1st, a couple of game developers and ‘other nice folk’ were invited to give talks on a topic related to indie game development. I was among those invited and decided to give a talk on Playful Culture.

Other speakers were: Jonatan van Hove (‘What I learned by building arcades’), Rami Ismail (‘The I in videogames’), Tommy Rousse (‘About Excessive Games’ ), Ida Marie Toft (‘Play Makers in Maldives’).

We had not discussed our talks beforehand but it turned out that all the talks were pretty complementary to each other, giving different perspectives on playful culture, games, makers and players.

The day ended with the Local Multiplayer picnic, featuring games such as Laza Knitez!!, Samurai Gunn, Eggnogg, QuickDraw, Johann Sebastian Joust and the hilarious and awkward Move game Magnetize Me. There were also some folk games played, such as Ninja and Lemon Jousting.

While playing we came up with a new, more subtle version of Lemon Jousting, I dubbed it Subtle Lemon Jousting. Instead of using two spoons, someone decided we could only use one spoon and use only that spoon hand to try and knock the lemon from the other person’s spoon. The game became much less agressive that way, it became more about intimidation and smooth movements, turning it into a subtle dance with the opponent(s).

Free to Play was a wonderful event, showcasing diversity in approaches, games, play and the audience. Can’t wait until next year!

‘Free to Play’ in Vines

Hover over the vine to turn the audio on/off.
Click on the vine to pause/unpause the loop.
If you want to use the vines: please link them through and credit zoewi (twitter) or zo-ii